We left Land Between the Lakes and headed to the Natchez Trace.  All backroads today, no highways, 120 miles…..just the kind of short day we like. 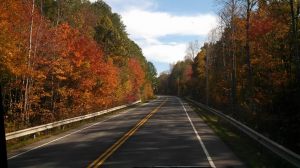 This is just after getting on the Trace.

The Natchez Trace goes 440 miles from Nashville to Natchez, Ms.  No commercial vehicles are allowed on the trace so NO semi’s and the speed limit is only50 mph so you just enjoy the view.  The area is rich in history and there are lots of neat stops along the way. No billboards, no gas stations, no carryouts,  so pack a lunch, lots of  pull offs and great views.  Here are a few… 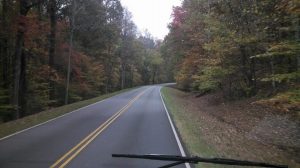 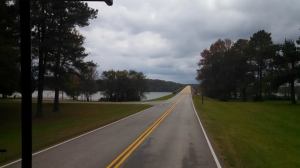 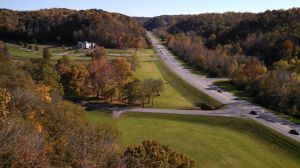 This last one was looking down from a bridge on the Trace.

and a view of the falls

We boondocked (camping with no hookups)  for 4 nites at the Meriweather Lewis campground where our friend Kyra was camping also.  We also got to meet up with Malia Lane who is traveling the Trace (in her motorhome) writing about the Trace for Motorhome Magazine.  We really enjoy meeting up with other full timers and had a wonderful visit around the campfire. Hopefully we meet up with Malia farther down the Trace later this week.

After 4 nites it was time to move on and we headed on down the trace, passing through Alabama

Another short day, 130 miles to Tupelo, MS.  We are at Trace State Park (full hook ups) since we are gonna have a few chilly nights and the cold isn’t good for either one of us. So we are cozy and warm here for the next week, temps will be back in the 70’s Monday, then we’ll head out Friday.  yep, drive 130 miles, stay a week….that’s how we roll.  below is the new camp, i’ll get a better pic later as this was late in the day when we got here….

Thank you all again for the wonderful heartfelt prayers for Dan.  We are blessed to be able to head south and get him away for the winter.  Between his heart, COPD, and the paralysis in his right hand, cold weather is the worst for him. Thanks for following along and indulging me on making this journal/blog.  Kris